Where to Surf in Australia

If you wonder where to surf in Australia? We tell you that Australia is the largest island in the world and as its own anthem says, " our house is girded by the sea ." This immense island has more than 30,000 kilometers of coastline and this means one thing: many beaches. It is said that if you wanted to spend a day on each of Australia's beaches it would take 27 years to finish. This makes Australia one of the best surfing destinations in the world where you can find waves for all levels.

If you are already convinced of living this experience ¨ Down Under ¨ (this is how Australia is called) here we present some of the most iconic places to surf in Australia.

Where to surf in Australia

Byron Bay is a very popular destination among travelers from all over the world for its waves, its good atmosphere and because it is full of people wanting to have fun.

Byron Bay is located about two hours from Brisbane and is the third most populous city in Australia (It has an international airport). Byron is a summer paradise with miles of beaches, nature reserves and surf spots for all levels.

Here you will find from long waves for longboard to powerful rights like Lennox Head, one of the best waves in Australia . This area has waves almost every day of the year.

There are many surf schools in Byron Bay where you can learn to catch your first waves.

Also, since you are in Byron Bay you cannot miss the sunset from the lighthouse, impressive.

Also a two hour drive from Brisbane, but this time to the north, is this small coastal town surrounded by nature. It has several spots and is even classified as a surf reserve.

The most popular wave in Noosa is a right in front of the town that with the large waves connects several peaks and generates a long and very fun wave, being protected by the wind it is usually very clean and glasy . Every year in Noosa the Surf Film Festival is held in October.

There are five spots in the main area of ​​Noosa and they are all sandy, so the sand changes with each swell. If the sand is good, the points are impressive, but for starters I recommend First Point.

A surf guide could be written about this area. More than 20 km from Manly to Palm Beach full of beaches with waves of the highest level, with a total of about 40 spots. It is one of the most popular places to surf in Australia.

For beginners the best beaches are Manly and Long Reef. For those looking for more level I suggest North Narrabeen, Dee Why, Curl Curl and Avalon. My recommendation is that you travel the coast with a car to be able to stop in the places where the waves are best entering.

A curious fact is that it was on Freshwater beach where in 1915 the Hawaiian Duke Kahanamoku showed Australians for the first time how to get on a board and slide down a wave. The Northern Beaches are without a doubt the heart of Sydney's surf culture.

The best waves of my life were caught in this area of ​​Australia. It wasn't long ago that I traveled over 1000km from Sydney to ride this incredible wave. Powerful on the right, long, reaches up to 5 meters in height and works almost all year round.

The Great Ocean Road is full of waves for all tastes and the place itself is spectacular. This road is for us the most beautiful we have traveled in Australia, and we have already taken quite a few.

Crescent Head is one of the most iconic places in Australia. It is located on the east coast, about 45 minutes drive from Port Macquarie. This small coastal town was named a National Surf Reserve, a category that protects the coast from urban development and the marine life of the place.

The wave that we find at Crescent Head is a perfect right for longboard but when a big swell comes in it is equally good for short boards. The beach is perfect to start surfing because it is protected by the south wind.

The place is full of travelers who travel the east coast of Australia traveling in their vans and caravans and stop at Crescent Head to surf one of the longest and most legendary waves in Australia.

The west coast of Australia offers us a large number of waves for all tastes and levels. This region south of Perth is famous for its wines and for hosting one of the world's surfing championships.

Depending on the conditions, Yallingup is a good place for all levels but don't ever go near Prevelly Bay unless you are a pro surfer. This wave can reach 6 meters in height and the bottom is made of rock, so wearing a helmet is mandatory.

Some of the most famous surfing beaches in southern New South Wales are found in Killalea State Park . Located just an hour and a half drive south from Sydney, this nature park was named a National Surf Reserve in 2009.

Killalea has two great beaches for surfing: Killalea Beach better known as The Farm and Minnamurra Beach known as Mystics.

Killalea is an ideal beach for those looking for big waves. Mystics Beach is a calm and very beautiful beach, perfect for surfing, swimming and having a picnic.

After a 25-minute ferry ride from the Australian west coast, you reach Rottnest Island, an island where there are no cars and you can only get around by bike.

The island has 63 beaches, but Strickland Bay is the best oriented and the one with the most consistent wave for surfing. When the wind is right, the wave that forms is good for both lefts and rights.

Surfing is not the only attraction of the place, nature and wild animals are the best of Australia, and on this island you can find the quokka, a kind of rodent that is always smiling.

Imagine a coast whose beaches are always waves, sunny and with a stable temperature all year round. Well to this, add some of the most important peaks in the world like Snapper Rocks and Kirra and you will have as a result the Gold Coast of Australia.

Surfers from all over the world come to this place every year to spend a season. It can be crowded but there are waves for everyone. Also every summer many Australians spend their holidays here giving a lot of atmosphere to the whole area.

The waves are very varied and for all levels, you can find epic spots like Snapper Rocks and Kirra and waves for beginners.

Another highlight with a lot of variety of waves is Byron Bay as we said at the beginning and it is very close to here, also with a lot of surf schools.

As you can see, there are a lot of beaches to surf in Australia, these are just some of the most popular. If you know any waves from Australia that you think we should add to this selection, leave us a comment. We are looking forward to discovering more places to enjoy surfing in Australia.

If you liked this article, share it on social networks and encourage your friends to come to Australia to surf with you?

If you want useful information to travel to Australia :

Do you like beaches and are you interested in knowing our selection of the best beaches in Australia?

Are you organizing a trip to Australia? These articles about some of the essentials in Australia are going to enchant you: 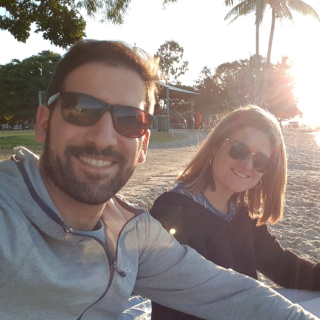